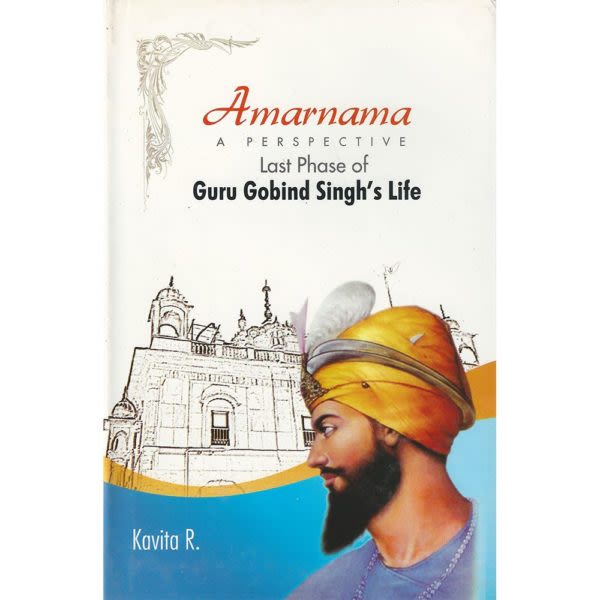 This 83 page hard back Amarnama is an English translation of 146 verses composed in AD 1708 by Bhai Natth Mall, a dhadi or balladeer who lived from the time of the 6th Guru, Guru Hargobind Sahib Ji to that of our 10th Guru, Guru Gobind Singh Ji.

It is understood that Bhai Natth Mall and his son had accompanied Guru Gobind Singh to the Deccan and entertained Sikhs at the afternoon assemblies reciting heroic poetry. From events narrated in the Amarnama it can easily be surmised that the author was an eyewitness to most of them.

It is written in first person, as if in the words of the Guru and finished within twenty-four days of the Guru Gobind Singh Jis ascension. It is not a work of any high literary merit. However, it is historically very valuable, not only because it is a composition coming from one of Guru Gobind Singh’s contemporaries and his companions but also because the author had personal knowledge of the events described in it.

The work briefly refers to Guru Gobind Singh Jis meeting with Banda Singh Bahadur on 3 September 1708, on the occasion of the solar eclipse, the fighting between the Sikhs and Banda’s men, the lodging of complaints by Hindus against the Guru before Emperor Bahadur Shah, Bhai Nand Lal’s presence in the Emperor’s camp at Nanded, the Guru’s generous and lavish distribution of charity among the needy, and the dispatch of Banda Singh with five Sikhs to the Punjab.