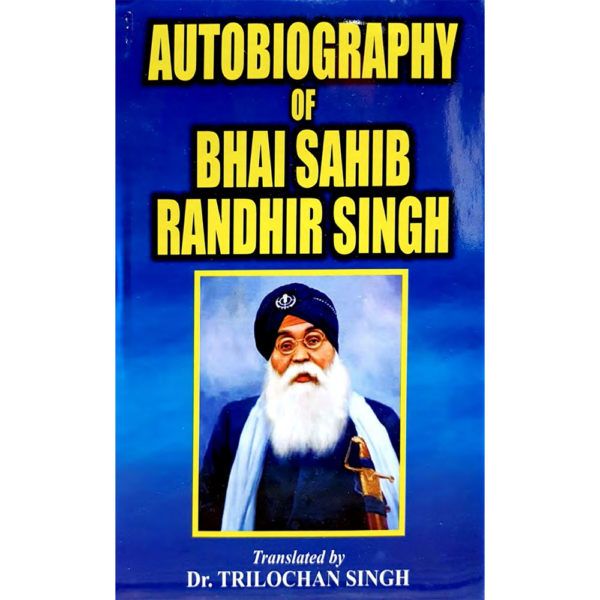 This autobiography, originally compiled from Bhai Sahib Bhai Randhir Singhs letters from various prisons and published in Punjabi, has been translated into English by Dr. Trilochan Singh, who was associated with Bhai Sahib during last 20 years of his life.

Bhai Sahib Bhai Randhir Singh (1878-1961) was an outstanding freedom-fighter and a great saint and theologian who has made a lasting contribution to the religious and cultural revival in Punjab, and was one of the first few Punjabi revolutionaries who staked their life and career to bring about political awakening and win freedom for their country. Son of a High Court Judge and educated in Govt. College and Mission College, Lahore, Bhai Randhir Singh ushered a moral and spiritual revival which set into motion what later on came to be known as Gurdwara Reform Movement. In the Rakabganj Affair (1913) it was his stern challenge to the British Government and stirring call to the people to organize resistance, which prevented the further desecration of the historic shrine.

In 1914, he was the only non-emigrant Sikh leader who completely identified himself with the cause of the Ghadar Party and suffered imprisonment for seventeen long years. He is known to historians of this period as “Hero of the First supplementary Lahore Conspiracy Case”. He is the only Sikh Leader who, in the last hundred years or more, has been given ‘Hukamnamas’ and Robes of Honour by the (then) four Takhats of the Panth, in solemn recognition of his sacrifices and impact on his times. His deep and original expositions of various aspects of Sikhism (more than 30 books) are a lasting contribution to Sikh theology, philosophy and mysticism. He distinguished himself in Punjabi prose and poetry by an erudite and powerful grand style of his own.

This autobiography, originally compiled from his letters from the various prisons and published in Punjabi, has been translated by Dr. Trilochan Singh, who was associated with Bhai Sahib during last 20 years of his life. To the translation Dr. Trilochan Singh has added a lengthy introductory thesis, based on through research work, throwing light on Bhai Sahib’s early life and giving fairly detailed account of Bhai Randhir Singh’s role in Rakabganj Affair and the Ghadar Party Revolution. Some of the facts revealed by him are a significant contribution to the history of this period. They bring to light the achievement and results of the Ghadar Revolution, and its impact on subsequent phases of Freedom Movement.