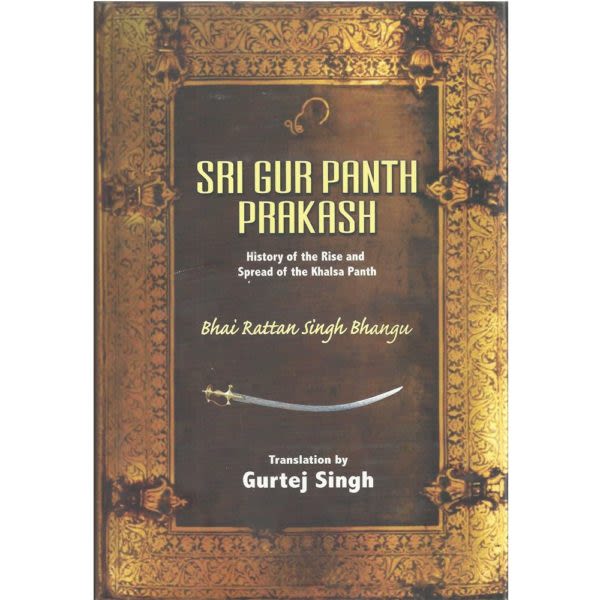 The highly respected Itihasik granth ‘Sri Gur Panth Prakash’, also known as ‘Prachin Panth Prakash’, is a treasure chest of Sikh history. Its author, Rattan Singh Bhangu, came from a lineage of Sikh warriors, and had first hand knowledge on many historical issues. Rattan Singh’s grandfather was the renowned Shaheed Singh Bhai Mehtab Singh ji, who beheaded Massa Rangar for the desecration of the Harimandir Sahib.

This is an English translation of Sri Guru Panth Prakash , a primary historical chronicle throwing light on the evolution of the Khalsa Panth. Originally written in vernacular Punjabi verse and with 170 episodes, this book presents episode 82-169.  Starting with the martyrdom of Bhai Taru Singh, Bhai Mani Singh, the rise of Nawab Kapoor Singh, Jassa Singh Aluwalia, the cruelty of Mir Manu, the bravery of Bhagel Singh and so much more!

When the British came to colonial power in India, they wanted to know the history of the Sikhs and their evolution into a formidable military power in order to prepare a suitable strategy to deal them.  General David Ochterloney, the British Agent at Delhi, approached his junior, Captain Murry stationed at Ludhiana to get an objective version of Sikh History.  Captain Murry came into contact with Rattan Singh Bhangoo, a direct descendent of two of the most illustrious 18th century Sikh Warriors, Bhai Mehtab Singh and Sardar Sham Singh, head of the Kroresinghia Misl.  It was from this dialog and recorded statements between 1809 and 1841 that this great epic of the Khalsa Panth came to be written.