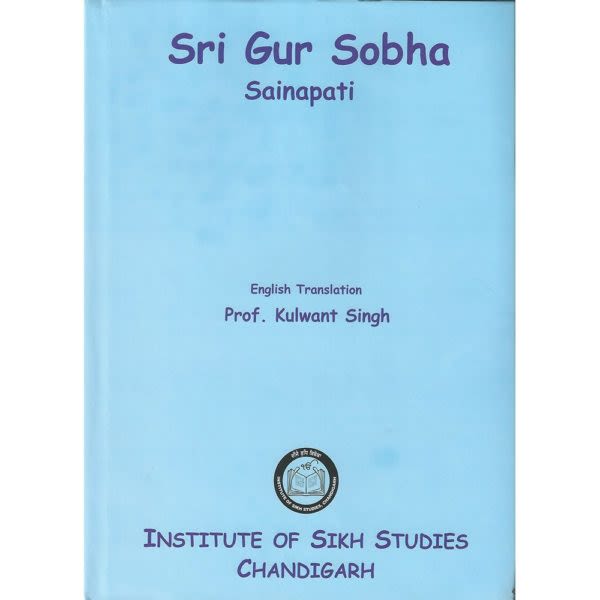 This 388 page hard back volume presents an English translation of Sainapati’s Sri Gur Sobha (translates to ‘In praise of the Guru’), an important text that was written in the court of Guru Gobind Singh, the tenth Guru of the Sikhs. Kavi Sainapati was one of Guru Gobind Singh Ji’s 52 royal poets.

Three things stand out about Sri Gur Sobha that make it an exceptionally invaluable text. First, it is largely devoid of mythology and is grounded in a kind of historical writing that was seldom practiced in that period.

Second, according to the Guru Ratanmal (1734), the Guru himself at times read and corrected Sri Gursobha, while it was being composed. Therefore, it could be the first reliable source of Guru’s biography and can help us correct later revisionist accounts.

Third, it is one of the few pre-modern texts that cogently capture the theology that led to the creation of the Khalsa. It helps us to see that Guru Gobind Singh elevated the entire Sikh sangat to become the Khalsa, which is now incorrectly assumed to be a “voluntary” order within the Sikhs.

Sainapati insists that liberation is not possible without the partaking of khande ki pahul, the Sikh initiation ceremony instituted by Guru Gobind Singh. The sangat’s metamorphosis into the Guru Khalsa Panth — a political body that was ordained to seek political sovereignty — is a recurring theme throughout Sainapati’s remarkable poetic composition.