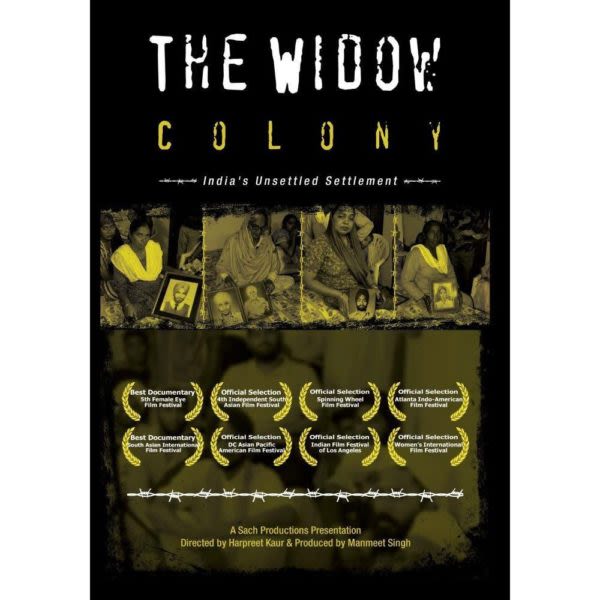 The Widow Colony is an award winning 74 minute film that takes an in-depth look into the lives of the widows of the Sikh men who were killed in the anti-Sikh massacre of November, 1984. The film, directed by Harpreet Kaur, explores the suffering of these women, their battle for justice and their struggle for survival in India.

“The Widow Colony – India’s Unsettled Settlement”, borrows its name from the settlement in Tilak Vihar, on the west-side of New Delhi, which is locally called the Widow Colony or Vidhva Colony. The film takes the viewer to the areas of Trilokpuri, Kalyanpuri, Sultanpuri and Mongolpuri, the same localities that suffered the major brunt of the Sikh killings in November of 1984. Along with the testimonies of the widows, supplemented with imagery of the killings and destruction that followed after the assassination of Prime Minister Indira Gandhi, the film conveys the intensity of the tragedy that occurred 30 years ago.

The film is provocative and scintillating in its effect but, what it achieves in doing most effectively is conveying the trauma that still haunts the lives of these widows. There is no denying that in all these years of analysis and discussion that has surrounded this issue, we have forgotten about the survivors and their need for rehabilitation. While the world has moved on marking the massacre as a chapter in history, these widows remain trapped in 1984. They have been in mourning for 21 years and will only be able to move forward when they see the perpetrators of their crimes punished. The widows express serious doubt in India’s judicial system based on the fact that over 4,000 Sikhs were killed in the capital city alone and 30 years and 11 investigations later, the Government has still not been able to deliver justice.

The documentary maintains a fair balance and illustrates the state’s direct participation in the violence. This argument is reinforced by intellectual pundits who confirm that the government’s silence on the organization of this carnage and its delay in delivering justice only exposes its own involvement. Notable personalities such as Patwant Singh, Kuldip Nayar, Justice Sachar, Madhu Kishwar, Jaskaran Kaur, and attorney H.S.Phoolka make it clear that by not addressing the November 1984 massacre of Sikhs, India will only encourage the repetition of such atrocities as a political tool for the attainment of power. The film concludes that “pogroms will recur in India unless the State acknowledges and records these violations in a transparent and honest manner, towards cleansing itself of the people and institutions that perpetrate these crimes and addressing the survivors’ right to knowledge, justice, and reparation.” India has an opportunity to exit the rhetoric of democracy and become an advocate for Human Rights by delivering justice and this documentary will hopefully become a catalyst for this much needed progress.

Please support this project by purchasing a DVD. Piracy harms the media industry and discourages organisations from making investments into great productions such as this, so we humbly request the Sangat not to copy the film but instead encourage others to buy the DVD so that the project team may be able to cover their costs and be able to continue their future Sikhi projects.

Be the first to review “The Widow Colony DVD” Cancel reply